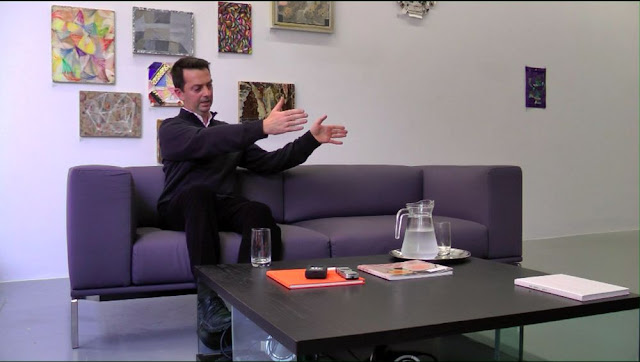 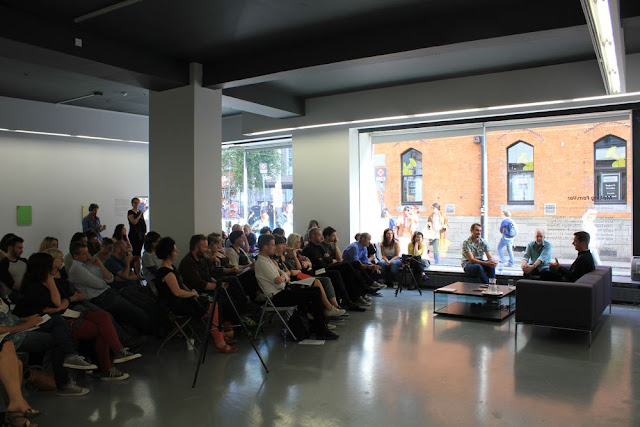 
“I propose a moratorium on the word[sublime]: let’s say what we admire in art and science, but let’s say it directly, using words that are fresh and exact.”
James Elkins[1]


If metaphor wasn’t hardwired into one's reception of the abstracted image, Mark Joyce and Mary Ramsden's paintings could be comfortably termed pure abstraction, or pure presence - the defining measure of the sublime. But our reliance on metaphor to make aesthetic judgments, and the agency of comparison and history to deal with a painting that you are presently looking at, offers the medium no respite from such tropes of convenience. Jean-Luc Nancy writes: "In the beautiful and in the sublime - which are neither things nor qualities of objects but judgments - and more precisely, aesthetic judgments.”[2] 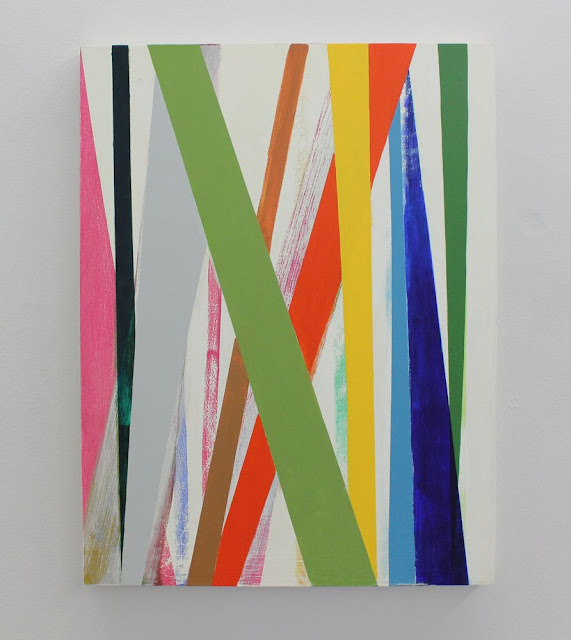 Mark Joyce
The Edge of Light (2012)
acrylic on panel 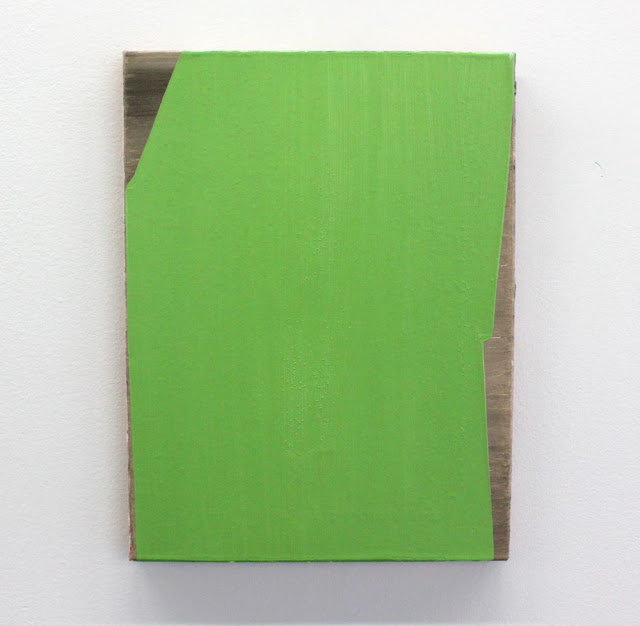 Painting in general has never shed itself of its inherited history, so terms such as the sublime and the beautiful have tagged along since Romanticism. Criticisms pitched at the sublime include the influx of personal subjectivities of the writer into the fold of writing. Furthermore, the sublime invites verbal flights of fancy and an escape from theory and critical thought, as the writer gets lost in the daisy field of the literary. However, as Mark Joyce observed during the Making Familiar(2) conversation with the artist at Temple Bar Gallery + Studios on 21st August 2012, art writers feel compelled to write on painting out of pleasure. The potential for verbal insights is richest when philosophers and poets write around painting. What else is left to talk or write about with regard to painting – surely not just surface?

Although James Elkins opines via two French philosophers that the sublime is the "central problem of representation itself"(Nancy), or the "crux of modern painting"(Jean-Francois Lyotard[3], my quandary is, I have always equated the term sublime to Mark Joyce’s paintings. I know now that the artist is well aware to thread carefully around such a term, as he said during the conversation, “I am fine with beautiful, but sublime..?” The mere mention of sublime regarding painting in general does suggest what the analytical philosopher Paul Crowther describes as "coloristic painterliness,"[4] but only if you reduce the sublime to J.M.W. Turner's painted sunsets.

Since Joyce's return to painting in 2003, after a photographic-turn, his skirmishes with colour and light have went from cold experimentation to warm discovery. Small in size, his earlier paintings evoke those secondary school moments when one is waiting for the litmus paper to turn red or blue; the subjects of colour, light, and music, registering as high coloured horizontal strips (or zips), wavy lines, and less ordered daubs of paint.

Up to recently, I imagined Joyce, like Piet Mondrian, in a spotless lab coat and white tiled laboratory, with jazz playing low in the background: the only spillage of paint found in the grout between the tiles. Why so? Just his unwavering modernist commitment to painting light and colour, like a scientist with a brain itch. Joyce's best paintings from 2003 up to, but not including, his recent solo show at Green on Red gallery Dublin in 2012, have been when his familiar use of horizontal bands of colour weren't so straight, and overlap; paintings that create doubt. His current paintings have closed the gap between his earlier coy experimentations to his current focus on pictorial space. In these more resolved works, Joyce is tip-toeing away from the exciting, but desperate bit-parts of his earlier painting series, to make works that retain the previous fractal debris, but are sturdily ‘framed’ and individually committed to being one full image in their own right.

But, it's not his use of full colour that produces this affect, but his consistent ground of white beneath. My subjective imagining of the sublime is not colourful or tropical, but white, black, North. The sublime lacks detail, no edge, semi-opaque. 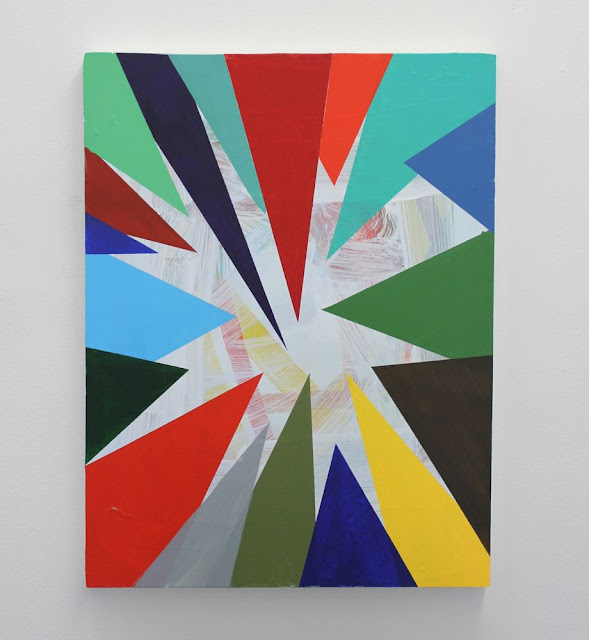 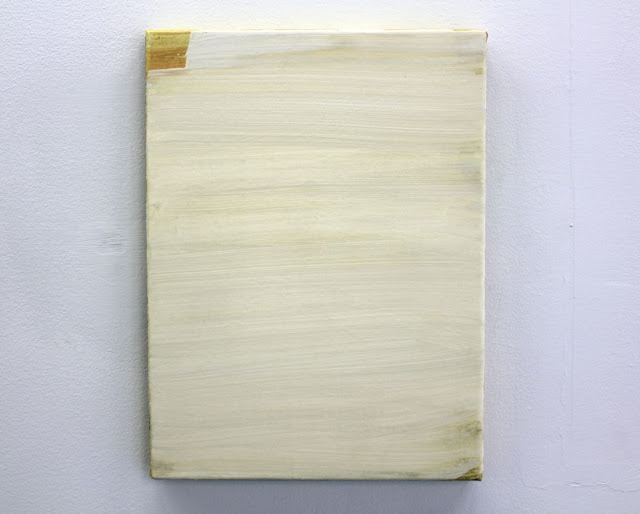 
Joyce's current paintings, originally shown at Green on Red earlier in 2012 under the appropriately reductive title of 'New Works', are exposures of the sublime. In The Edge Of Light (2012), swats of paint, or torch beams, crisscross the picture plane in unapologetic primary colour. The colour is applied flat and sharp; nuance captured through greys and some scrapped back shots of paint/light. The most arresting work is Shutter, 2012, where one point-perspective shards of colour miss the ‘point’, while beneath, a haze of painted forms invites the viewer beyond the violent tips of colour. What we shouldn’t mention here is heaven and earth with regard to the sublime, although Corregio’s painted Baroque ceilings do come to mind when looking at Shutter: "The imagination is thus destined for the beyond of the image."[5]

As is the case with most forty-something painters, Mark Joyce’s painting practice can be judged and reflected upon through the work he has produced over the last 20 years. Mary Ramsden’s practice is fresh out of the oven, but, as her paintings lack explicit expressionist tendencies or figurative elements, her works bespeak a maturity well beyond her years as an artist.

What bridges Mark Joyce’s paintings to Mary Ramsden’s is Joyce’s answer to my question regarding the sublime while in conversation with the artist, in which Joyce shared an insight into Edmund Burke’s origins of the term “sublime,” aptly provoked from a Dublin hotel room overlooking the River Liffey, which broke its banks in 1746. Burke wrote in a letter following the event: “that state of the soul, in which all motions are suspended, with some degree of horror[and]the mind is so infinitely filled with its object that it cannot entertain any other...”[6] 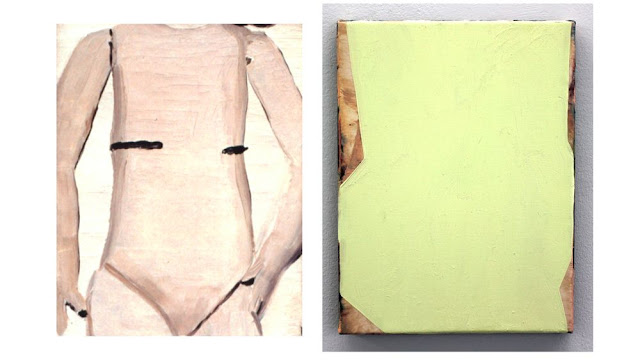 Mary Ramsden’s spread-eagled uniform shapes are always at the limit of breaking the border of the canvas, sometimes spilling over, and always leaving a glimpse or two of an underpainting. Ramsden’s paintings are outy bellybuttons to Joyce’s innys. The latter gives us caverns of sharp perspectives, the former a protective shell of buttery colour. In some ways Joyce’s work does not only play with light and colour, but also space, explicitly so in his new works. Whilst Ramden’s works avoid space, representing the nothing of the sublime[7], but paradoxically, wholly figurative; as if we are up close to a figure – too close – to make out its shape, reminiscent of Luc Tuymans’ Body (1990).

"Stretched to the limit, the limit (the contour of the figure) is stretched to the breaking point, as one says, and it in fact does break, dividing itself in the instant between two borders, the border of the figure and it's unlimiting unbordering. Sublime presentation is this feeling of this striving at the instant of rupture, the imagination still for an instant sensible to itself although no longer itself, in extreme tension and distension (‘overflowing’ or ‘abyss’)” (Jean-Luc Nancy)[8] 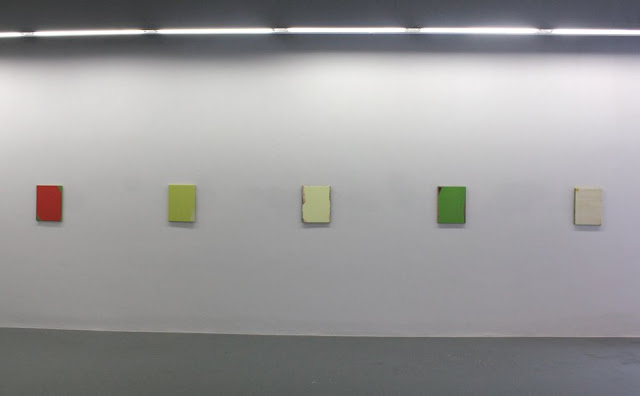 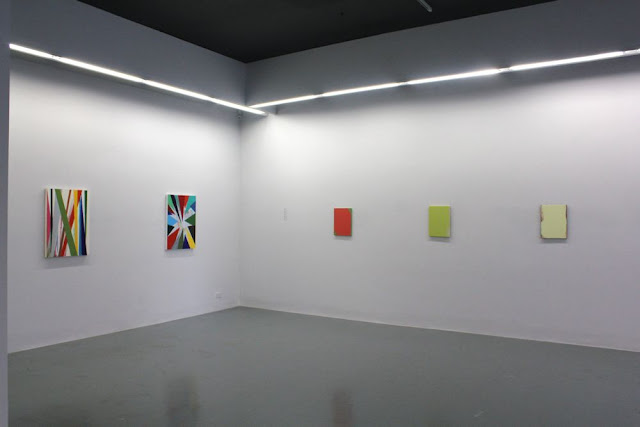 We as viewers invariably use metaphor and comparison to shrink the artwork into the knowable and graspable: this is especially true of painting. Hegel describes our use of such tropes as “shrinkage,” a way of dealing with big ideas or events that make us stutter when there are no words forthcoming: a term like ‘sublime’ sorts out this subjective mess, just as the term schizophrenia bracketed unspecific mental illnesses in 1960s America. James Elkins is eager to point out in his essay ‘Against the Sublime’ that, although the sublime “is in the lexicon of contemporary art discourse” it should be abandoned, as “it takes people away from the real world of politics and society, of meaning and narrative, of culture and value.”  His solution: “find synonyms to express what they mean, and those synonyms are apt to be more telling, and more useful, than the word sublime.”[9]

Elkins’ dissatisfaction with the term stems from its contemporary misuse; its being out-of-date, its forgotten history when it is used; its theological agency; or its ignorance of poststructuralism. Bottom line, the term is a good mop for excess!

But, in a time when contemporary modes of art are continually abandoning, or forgetting, their ever-shortening histories, the sublime has never abandoned painting (or painting the sublime), which is the aesthetic medium par excellence – one of many reasons that explains painting’s isolation from contemporary art discourse, as it never benefitted from the cushion of post-minimalist or socio-political theory that has been built up around other art since the 1960s. What painting did get by way of theory was grand philosophical narrative that included Lyotard’s sublime articulations of Barnett Newman; Deleuze’s projection of the baser animal instincts onto Francis Bacon’s painted deformations; and Derrida’s 400 page tome The Truth in Painting, which opens with the proclamation: “I am interested in the idiom in painting” (read   the ‘proclamation’ closer and you will see where Derrida is going, or not going ... I gave up on following after 100 pages).

However, the sheer scale of Derrida’s verbal outpouring validates the painted subject as a grand producer of language, and not just a habit, a quirk, that is difficult to swat away. JAMES MERRIGAN


[7] Edmund Burke, A Philosophical Enquiry into the Origin of Our Ideas of the Sublime and Beautiful, Oxford paperbacks, 2008.p. 95.

Posted by Fugitive Papers at 01:52