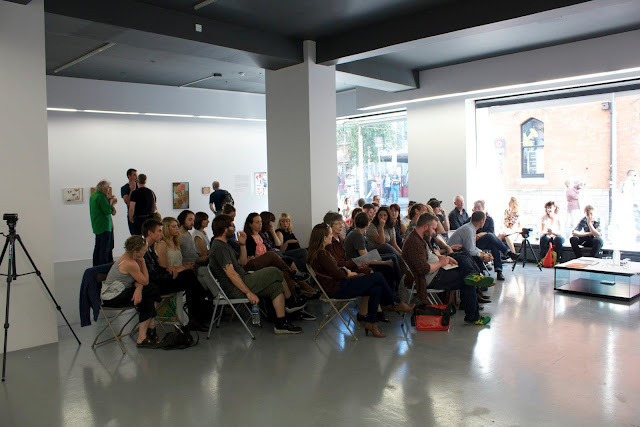 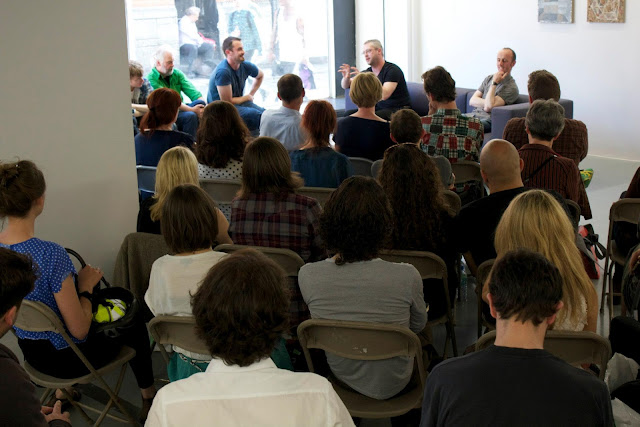 It maybe misleading to use the term "collage" when referring to Paul Doran and Mark Swords' paintings (not to mention the Braque and Picasso association), but perhaps collage is a more fitting way to describe their shared process of inviting unexpected elements into the predetermined materiality of painting. The art critic Donald Kuspit describes "collage" as a "flimsily made"..."deliberately flawed"..."ramshackle"... "helter skelter" looking “accident.”[2] He follows this up with his usual psychodynamic superiority over the art object: "The collage replaces privilege with equivalence, definitions of artistic being with artistic becoming, unity with energy."[3]

Unlike the limiting oppositions of abstraction vs representation, collage is bi-curious; a formal deviant; a parasite; a visual expression of the fraught relationship between image and word. NO FRAME IS REQUIRED! And if a frame is considered in the mix, it is usually swallowed up by the painted image: think Howard Hodgkin’s paint-splattered frames. Failing that, the frame is dis(figured) by the artist. 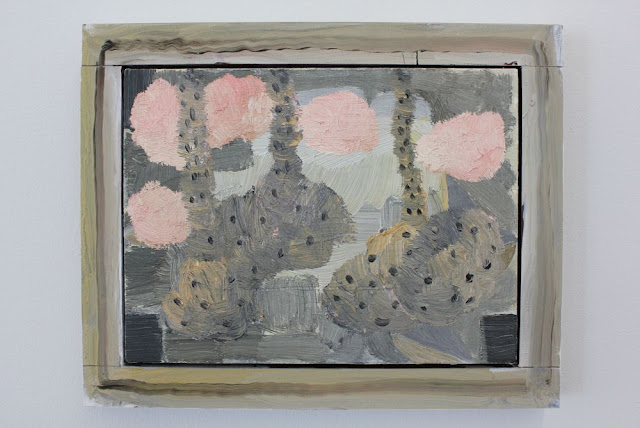 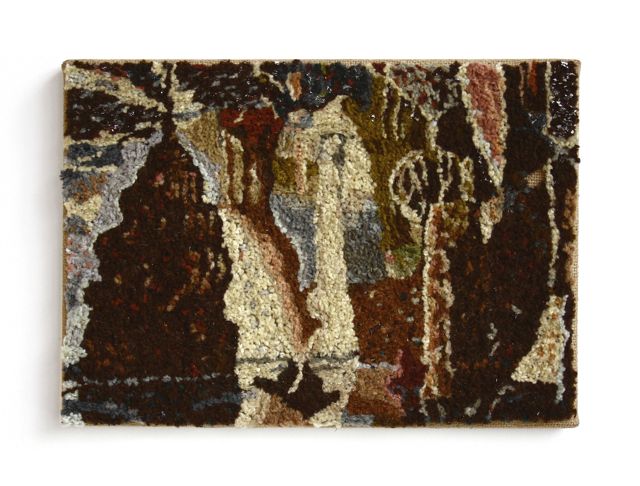 Dis(figurement) is Paul Doran's game. The backs of his current paintings are a ramshackle mess. They look and feel like they were pieced together from off-cuts found outside the tidy workshop of an overly particular carpenter. It doesn't get much neater on the front, where thumbnail shaped pieces of hardboard and plywood are flaked into an admixture of acrylic and shredded drawings. (This "thumbnail" description originates from the first day I met Paul, when he had blood under one thumbnail  - the mark of a hammer blow from some intentionally awkward construction I bet.) 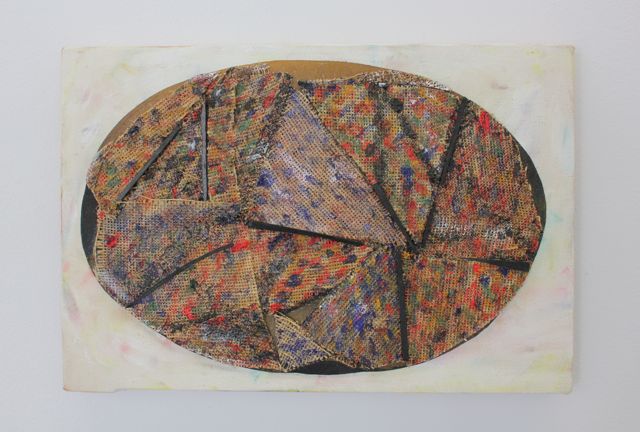 In contrast to Doran, being 'particular' is Mark Swords' game. We could assume that Swords is the "overly particular carpenter," who inhabits the tidy workshop from which Doran salvages the discarded waste from outside. This opposition between ‘inside’ (Swords) and ‘outside’(Doran) is the mitosis that is needed to separate the two artists. Swords’ works remind one of the Post-Impressionist interiors of Pierre Bonnard and Edouard Vuillard – self-proclaimed prophets (Les Nabis) of modernity. His assemblages are the result of patience and persistence and dexterity. Doran’s objects suggest Paul Cézanne, in which the sense of touch equals sight. Both artists make works that are hard-earned, for the viewer and the artist. 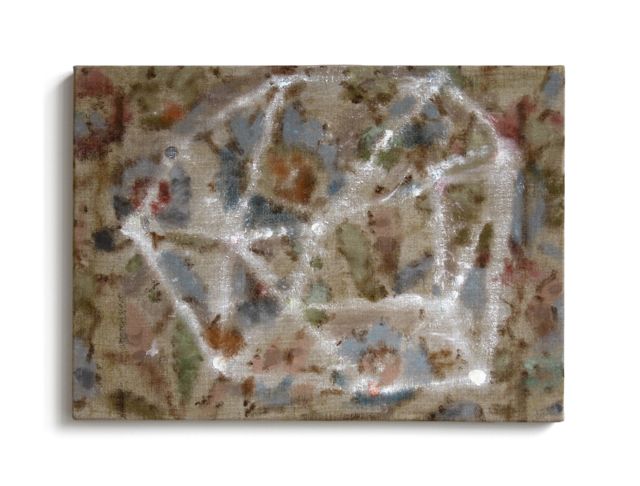 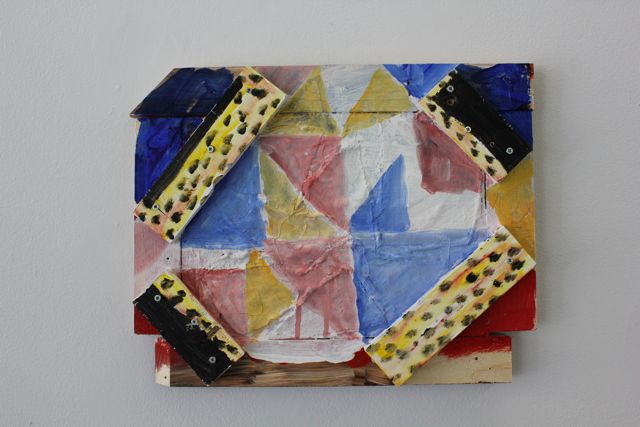 Although both artists invite chance, Swords is a considered faith in the unforeseeable (“Prophet” maybe stretching it), whereas Doran's material meddling looks like a stick of dynamite was shoved into Pandora's Box. Doran is waiting to be surprised - inviting that tension between chance and intent to beget a work that is perpetually becoming. His art objects are demolished constructions – a continually salvaged process rather than recycled style. 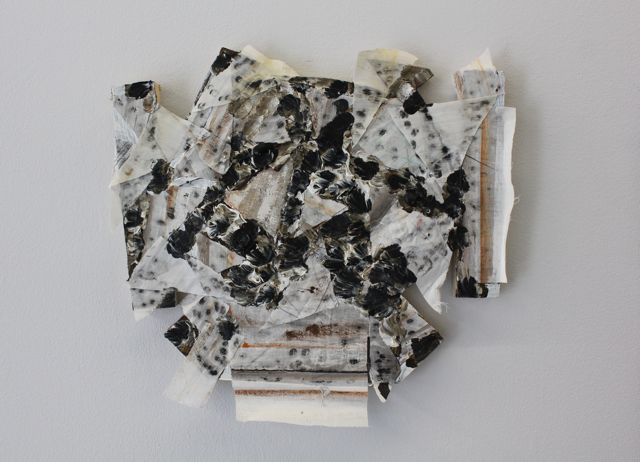 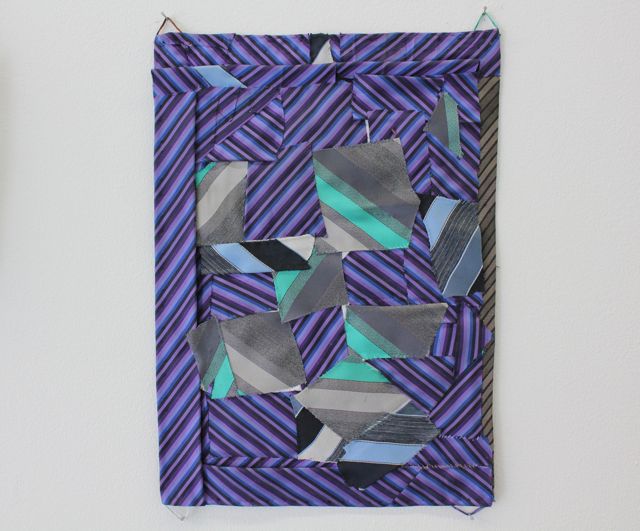 Both of their practices are cursed (or blessed) by contradiction: formal conundrums of  beauty and the beast. Swords' objects are usually well-dressed, while Doran’s have just got out of bed...and on the wrong side. His painting It’s not easy to be me looks like a handful of doilies were pasted together  – a coagulated mess from last night's food fight. Paired with Swords’ dapper Four Ties 2012, we get a sense of their contrasting sensibilities. Saying that, Swords’ Everything is connected (See Below) seems like the painting stretcher is wearing the wrong size canvas, as ‘staples’ wander from the edges to the painting proper. These conundrums and contradictions are made visible in how both artists are placed side-by-side at Temple Bar Gallery & Studios. What we get from Doran and Swords is a mixed bag of spanners and gems. 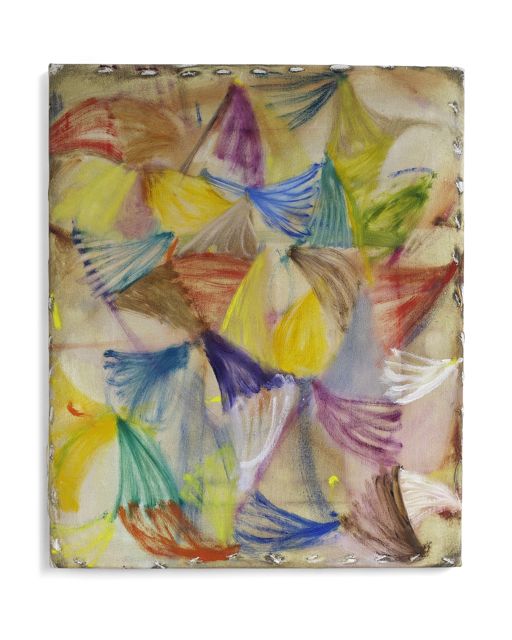 Mark Swords, Everything is connected (2012), oil on canvas. 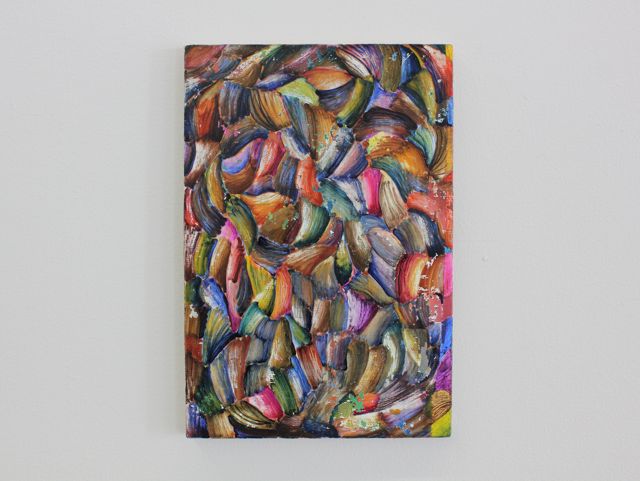 Swords’ intense jungle of curved, fan-shaped forms (See above: Veil), is one of the most vibrant and intense works in the gallery, in which light and colour compete for common ground. The key to this work is a band of underpainting that is left exposed on the right edge. It’s un(finished). It is becoming. His other painting entitled Forgery is the real  ‘spanner’ in the works: however well the composition holds the painting together, the ‘badly’ mixed primary colours revisit Picasso’s assertion that the creche art class is where art begins, and ends. 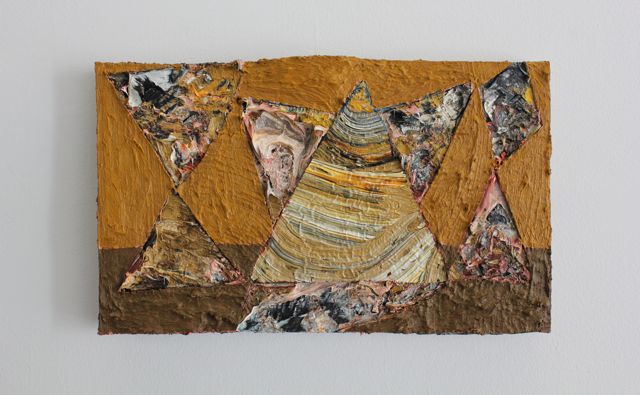 In the case of Doran, his history with oil paint is background noise to his new acrylics. His earlier oil paintings are layered fat with thick whips of paint like Mud Cake – a collector’s confectionary (See above: Untitled 2006-2011). In other instances he moves oils like water, with the effortless nonchalance of a janitor scooping the scum to the edges of the swimming pool (See second image from top: Untitled 2008-2012). Just beside, and perpendicular to this work by Doran, Swords gives us some of the same stalagmite/stalactite forms, but in carpet fibre (In a Cheddar Cave 2009): an uncanny coincidence or shared sensibility? 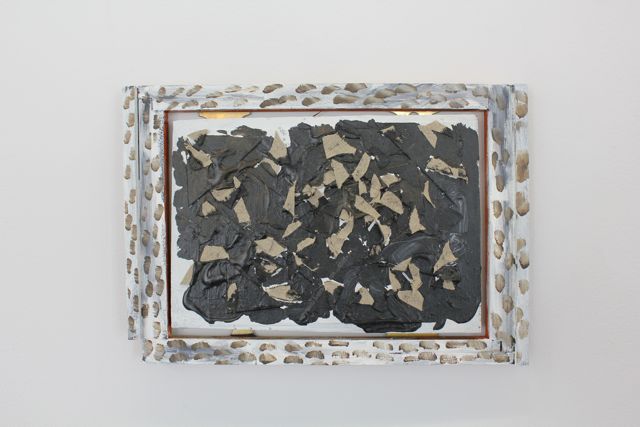 Since 2009, Doran has worked solely in acrylic. The first acrylics look like they want to grow up to become oil paints. The paintings that immediately followed the switch from oils to acrylics are rich, not primary (See above: A Guston cloud hangs over my head). His more recent acrylics are less self-conscious, removed from oil painting’s ambition.

Just after hanging Doran and Swords' work at TBG&S, Robert Armstrong pulled out a  'bottom line' quote by Robert Hughes, from the hundreds of quotations that surfaced on the internet following the sad news of the art critic's death on August 6th 2012. The quote says so much about art, but reads like it was written for Doran and Swords: "In art there is no progress, just fluctuations in intensity”.

In a time when contemporary art is afraid of its human reflection, painting offers a mirror. What can be gained from looking and understanding the relationship between Doran and Swords and their works, is a belief that "fluctuations of intensity" is progress, and can only be achieved through the shared synergy of verbal and visual insights. JAMES MERRIGAN

Posted by Fugitive Papers at 18:10