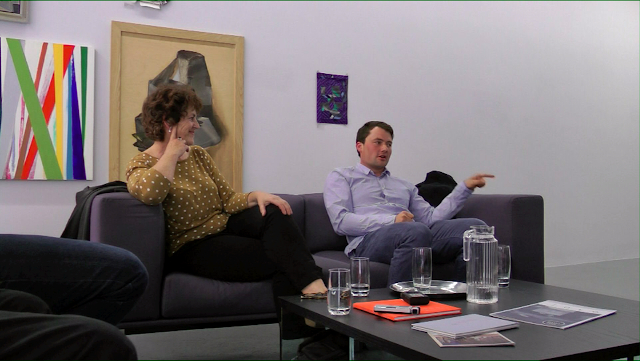 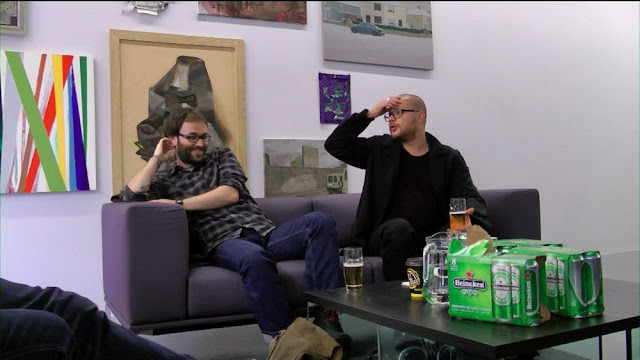 
It was difficult to write following Eithne Jordan + Daniel Pitin’s conversation because things seemed resolved, it was done, dusted. There was a shared commitment to their way of augmenting painted space with their subtractive and additive means that said confidently, “I know.” It was reassuring. It was welcome. The elements of photography and painted space are not argumentative on their respective canvases, it is refined, or becoming refined. As Mark Swords observed following Andreas Golder + Damien Flood’s conversation, the opposition between refinement and awkwardness is a pattern that can be observed in the painting practices and conversations that have been part of Making Familiar so far. It’s nothing to do with maturity – Mary Ramsden’s paintings are the epitome of that journey of refinement.

Writing descriptively about painting seems superfluous at this point of Making Familiar. Walter Benjamin wrote that “Speech conquers thought, but writing commands it”[1]: but do we want to “command thought”? Is it not reductive to do so? Should we reduce the image into theoretical or descriptive verbal diarrhea, for no other reason than to offer the writer a space to wax lyrical? 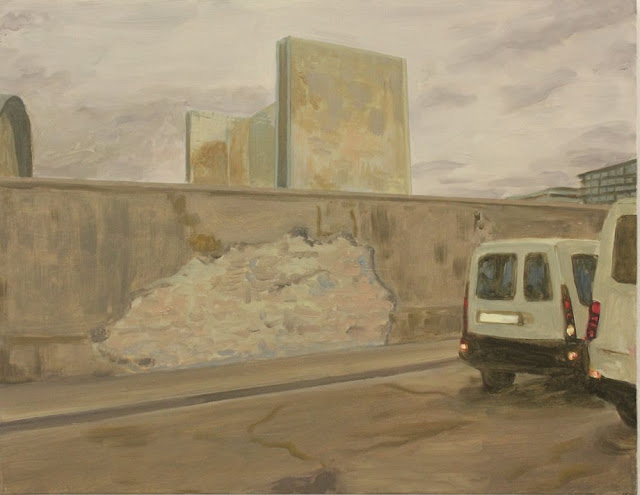 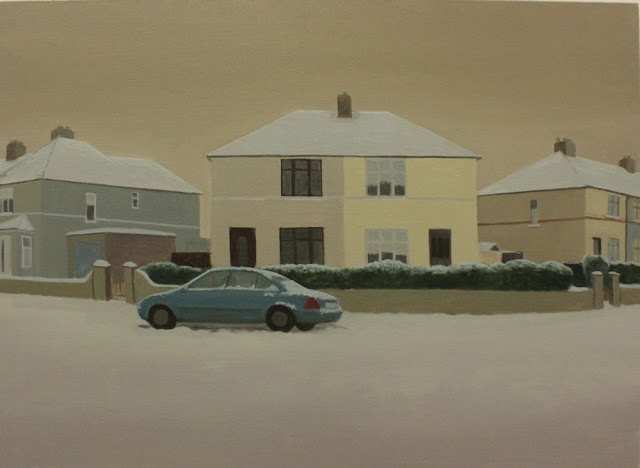 
In a conversation with Robert Armstrong after hanging Eithne Jordan's work Winter X11, he referenced Alex Katz with regard to Jordan's compositional complexity, which is over-coated in flat simplicity. Shared agreement followed, but it was that flawed talking-whilst-thinking way of discussing the painted image directly in front of us, that my sentence above can only hint at. Like Making Familiar’s cumulative structure, it was what was said over the course of the last 5 weeks ( or 8 months of planning this exhibition) that armed the lining of Robert’s observation. Perhaps he only said "Alex Katz" and no more, and I knew what he meant. 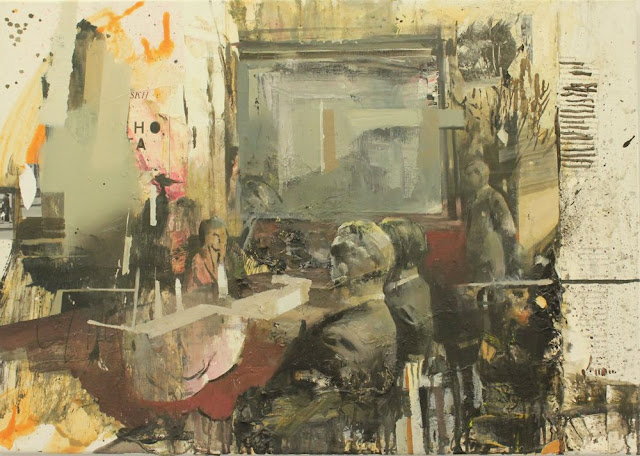 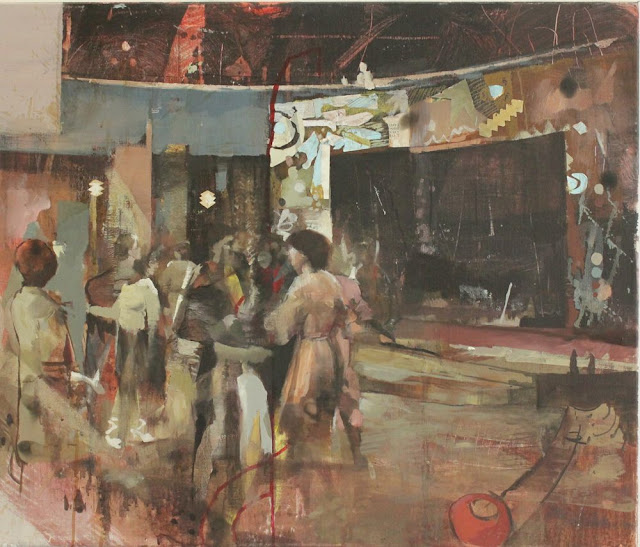 The same can be said of a conversation that was had with Daniel Pitin, following the official conversation with the artist in the gallery. Politics and art came up at the dinner table. It was offset by a question posed in the gallery by the Czech Ambassador to Ireland Tomas Kafka, that pointed a finger at Daniel being a late child of communism. But it was the artist's aversion to such political agency at the dinner table that said so much more than his outward denial or polite agreement in the gallery. Maybe it was a case that being born late into such a regime allows Daniel to be objective about his position as an artist – a painter who desires to activate space with paint, not to paint the pangs of history. As Jacques Rancière observes: aesthetics and politics are intrinsically tied to art without being predetermined.

If you consider Damien Flood + Andreas Golder's shared music taste, Alan Butler's metaphor is perfectly poised as both criticism and compliment; depending on whether you want to be an artist that approximates The Thing, or an artist that makes The Thing itself. Note: I am defining The Thing as something that is easily verbalised but almost impossible to visualise, such as a feeling, mood etc. The metaphor of death metal can be stretched even further when you consider the genre of music that we are talking about ("genre" sounding pompous when equated with death metal). Death metal is not exactly the same as Peter Cushing rolling verbs off his clipped British tongue – death metal looks like Andreas Golder's tongue twister of a painting Kuss (2011) – a “nastier” version of Gustav Klimt The Kiss (1908) – and  feels like Flood's headbanger mound in Fur(2012). 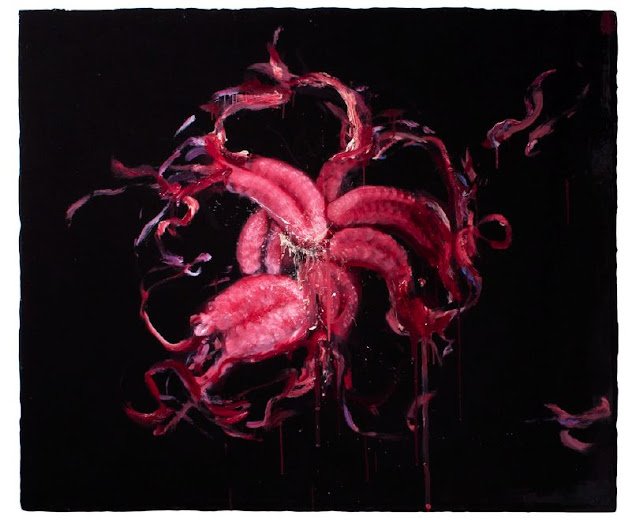 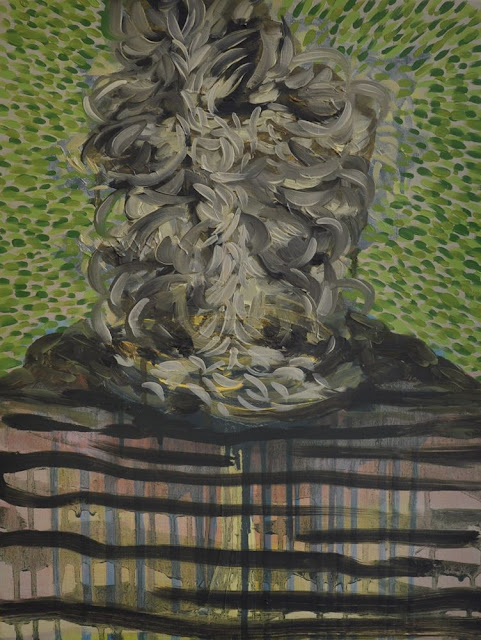 Previously I spoke of the subject vs object in Diana Copperwhite and Vicky Wright's paintings, but The Thing is something that has only emerged during the conversation with Eithne Jordan + Daniel Pitin (in relation to the feeling or mood of a work of art), and during Damien Flood + Andreas Golder’s conversation, whereby The Thing became the avoidance of the subject, because the subject – as articulated through language – is a poor cousin of what is being said (or not said) on the canvas. 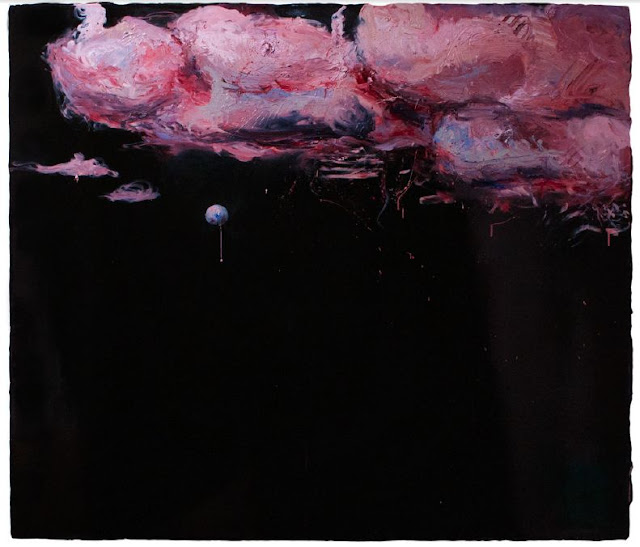 
The Thing is difficult to extricate from the paintings of Andreas Golder + Damien Flood, but it’s there, hiding beneath the paint in Damien’s work, and behind the authorial denial in Andreas’ paintings.

Andreas Golder’s two larger paintings in the gallery Kuss and Illustration für J. P. Sartre have 3 steps to ‘refinement’: prepare canvas with thick gesso; coat with black glossy layer of oil paint; apply a gestural impasto layer of pink and red to illustrate a scene or thing. As he said during the gallery conversation, the reflective surface gives enough information that there is no need to overcomplicate things in the gestural passages. The impact of his paintings are instantaneous, helped along with his fetishistic use of material. Linseed oil flows over the edges of the unprimed canvas. Choppy black crusts of paint reach beyond the border of the paint stretcher. Cynically, his paint application is perfect for the art market conveyor belt (I don’t think he would disagree), and have enough impact to hold the collector’s attention for the check book to be unfolded. But there is more to the work than surface and being obligated to the gallery and art market. I fell in love with them as soon as we opened the wooden crate in the gallery; time will tell if it was a one night stand...

But Andreas doesn’t want to be “analysed.” When the artist responded to my “subversive” reading of his work as my projected desire, and nothing to do with him, there is sense that he is playing the Gerhard Richter ‘debunking’ card, whereby the artist deflates the verbal bombast that painting might potentially produce by ‘admitting’ that painting is “pure stupidity,” or, “I do it because I have to pay the rent.” It’s superior posturing from a false self-effacing position. These are all defense mechanisms to extricate the author from the responsibility of their conceived imagery. But I have to admit, when painters do talk about what is behind the paint, I am usually disappointed. 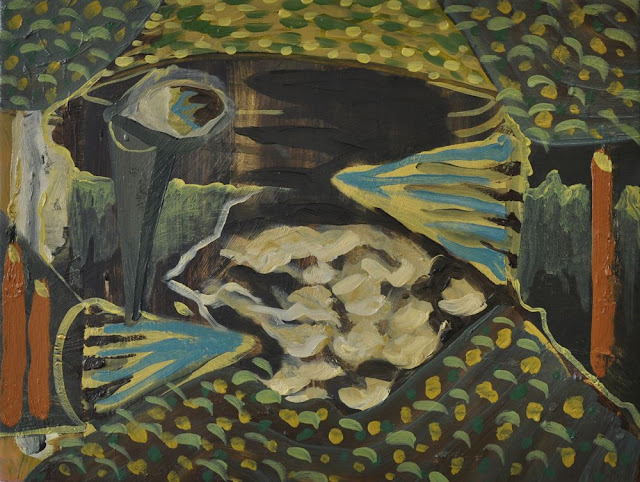 Following the conversation with Andreas + Damien, Fine Art student Chris Collins asked about the necessity to make a painting ‘work’ on the part of the artist – that ‘failure’ cannot be considered. This is something that has been remarked upon throughout the Making Familiar conversations – paintings being discarded, worked over, or serialised in scale or medium until they ‘work’. In the case of Damien’s paintings, which are slow-burners rather than impact pieces, there is an constant challenging of his own aesthetic taste and what he presumes will be the viewer’s taste. In contrast to the calm surface of Andreas’ paintings, Damien’s works are agitated. I can imagine Van Gogh pausing for some time to rub his scalp in front of them. They are relentlessly optimistic. There is a love of paint and what paint can and cannot do. His paintings are the seeds of ambition – seeds that are blessed with a thyroid problem. His painted images are not cellular, but granular, and aesthetically stubborn.

Responding to Chris Collins’ question regarding the artist's pressure to make paintings that work: of course, it is the artist’s choice and responsibility to choose a painting that he/she will bravely reveal to the gallerist, and then the public to judge. It is also the artist’s responsibility to commit to drop the paint brushes and move sideways to the next canvas. However, there should be an element of wavering insecurity in what the artist perceives as a successful work. Perhaps, overtime, artists begin to solve the visual conundrum of the viewer, gallerist, and collector’s aesthetic taste in their immediate circle. But there is always a tinge of visual rebellion in the work of represented painters such as Eithne, Daniel, Damien and Andreas, which their solo shows for their respective galleries have revealed over the years. There seems to be a shared understanding between gallerist and artist that aesthetic taste needs to be continually challenged, if not, the artist will end up seeing his/her signature looking back at them in the mirror: that’s a creative cul de sac if ever I’d seen one. JAMES MERRIGAN

Posted by Fugitive Papers at 06:28